We left Poland on Sunday and headed for Poprad, Slovakia. We spent the night at the foot of the High Tatra Mountains at the water park resort, AquaCity – 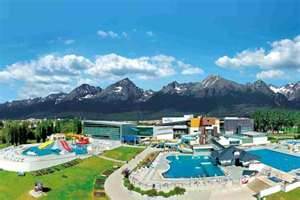 a green resort powered by geothermal and solar energy.  The boys had a great time in the many different indoor and outdoor pools and water slides.  Plus there was a 3D laser show with animated holographic images projected on a sheer wall of water! 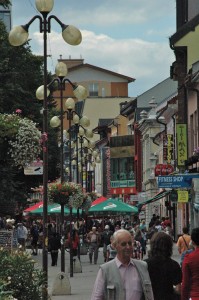 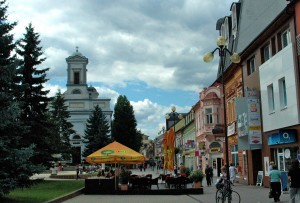 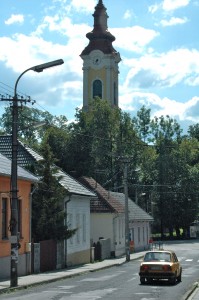 It was an interesting drive, never a direct route.  We saw grazing cows chained close to the road, funny cone-shaped haystacks, some tall skinny houses with steep roofs, and lots and lots of sunflowers.  Besides being the flower of my home state, the sunflower is mathematically fascinating.  Their seeds are used to make sunflower oil, their leaves can be used for cattle feed and the stem fiber can be used for to make paper.  All the sunflowers we passed, were passed their prime though and droopy rather than sun adoring.

We are now in Budapest, Hungary.  Here is a link to pics of our apartment in Pest for 10 days.  We are all pretty tired.  Our first full day here was pretty lazy as we tried to mentally adjust to being in another country, another city…

I finished reading Auschwitz: A Doctor’s Eyewitness Account by Miklos Nyiszli and Five Chimneys by Olga Lengye, both horrific tales from survivors of Auschwitz.  Of the two, I would recommend Five Chimneys as it covers much of what the doctor recounted but with less autopsy detail.  Several things haunt me, but these three from Lengye’s book struck me the most:

“Could such conditions really exist in Europe in the twentieth century?” – When I first learned anything about the terrors of the Nazis, I was at an age when to me anything ‘historical’  – especially anything that predated the ‘invention of color”! – was long ago.  But now, 40+ years past my birth, I realize that events that happened 30- years before my birth really didn’t happen that long ago.

Chapter I – 8 Horses – or 96 Men, Women, and Children – In May 1944 the author’s husband, Dr. Lengyel, was to be deported to Germany immediately.  Apprently, his hospital didn’t order enough pharmaceuticals from the Bayer Company, a company which collaborated with the torcherous experiments conducted on prisioners at Auschwitz.  Encouraged to join her husband, she, her two sons under the age of twelve, and her parents were waiting at the platform in the railroad depot when they realized any desire to turn back was impossible as the entire station was surrounded by hundreds of soldiers.  Anyway, after six nights with 96 other people and their hastily packed luggage in a cattle car that would under normal conditions carry 8 horses, it was a relief to finally reach a destination.  I often feel uncomfortable around strangers in tight spaces – usually it’s not even 100 people and in a much larger space than 12 people/size of one horse.  Add the uncertainty of not knowing where, how long, no bathroom…I’d have been shot before the train left the station.

“With rare dignity, the Greeks refused to kill the Hungarians!” – The scale of the mass liquidations the Germans took on was a lot of work requiring a lot of cooperation.  The authority of few commanded the obedience of many.  Sonderkommandos were prisoners who were tasked with assisting the exterminations.  They were given better living conditions in exchange for the unimaginable tasks they were ordered to perform – for about four months  – then they were killed and replaced.  One of the 14 generations of Sonderkommandos revolted on October 7, 1944 and killed over 70 SS men and damaged one crematoria – 451 Sonderkommandos were killed that day as they would have been anyway.  In the summer of 1944, as the Hungarian transports arriving increased, the need for more Sonderkommandos increased.  At least 400 Greeks were ordered in the Sonderkommandos but refused.  “They declared they preferred to die themselves first.”  The Pro-German Hungarian government cooperated with the deportations of the Hungarian Jews but these Greeks refused to cooperate.

I started reading The Peasant Prince: Thaddeus Kosciuszko and the Age of Revolution, a book recommended to Kevin.  The Polish Kosciuszko was a national hero of Poland, Lithuania, Belarus, and the USA.  A firm believer in equality, he requested that the assets from his estate be used for freeing and educating slaves.   Very interesting book and hopefully I will finish it.  I’ve moved on for now and just started a fiction book, The Devil Speaks Hungarian.

Speaking of speaking Hungarian (magyar)…apparently the ‘English language is more closely related to Spanish, Russian or even Hindi than Hungarian to any of the above.’  I haven’t even attempted the basics yet.  I read ‘Hungarian is a beautiful language, but it is a prison’.