We’ve been here for a week already. Without spending too much time ‘sightseeing’, we have seen many of the attractions of Budapest at least from the exterior. The Hungarian Parliament is open to the public this afternoon as part of the St. Stephen’s Day celebration but the line in the hot sun made the price of admission too high for us. We went into St. Stephen’s Basilica yesterday but didn’t see the right hand of St. Stephen, known as the Holy Right, that is kept as a relic.  Apparently as part of today’s festivities, there is a procession of said hand around the Basilica, but we will miss that too.  Aside from the air part of the Air and Water show this morning and hopefully the fireworks tonight, we aren’t participating in the holiday festivities.  Although, I did see the raising of the flag this morning in Kossuth tér.

We saw the exterior of the Great Synagogue also known as Dohány Street Synagogue.  It is the largest in Europe and the second largest in the world.  We walked across the Chain Bridge (Lánchid), which connects Buda, which is west of the Danube, to Pest, which is east of the river.  On Buda Castle Hill we saw the Matthias Church, Fishermen’s Bastion, and the entrance to the labyrinth, a large cellar system of connected caves.

During a walk along Andrássy Avenue (referred to as the Hungarian Champs-Élysées), we saw the exterior of the House of Terrors and the Opera House.  We did go into Alexandra’s Bookstore and up the escalator to Bookcafé to see the grandiose ceiling of what was once the Paris Department Store.  The bookstore sells wine as well, simply brilliant! The floor was so polished it looked like water.  I hope the puddle of drool I must have left there just blended in.

Just off Andrassy, on Liszt Ferenc tér, we had dinner at Menza, Hungarian for a drab school canteen.  Designed to recreate the Soviet-style canteens, Menza has a funky retro-vibe more sophisticated than drab.

Last night we had dinner at another funky retro joint in the City Park called Pálinka, named after a Hungarian fruit brandy with a very high alcohol content.  I chose to try the sour cherry with honey as it was only 32% alcohol.  It was served in a small shot glass luckily.  My consumption of this had nothing to do with us getting on the wrong bus to go home!

Not a fan of paprika or meat, the only other Hungarian ‘cuisine’ I can say I’ve tried is Fröccs, a Hungarian wine spritzer.  The pronunciation seems to rhyme with ‘itch’ and the varieties are just as complicated.  See graphic below (sorry I don’t know who to credit).  I have seen but have had no desire to try Lángos, a deep fried dough made with potatoes and topped with different things such as tejföl (sour cream), cheese and garlic sauce. 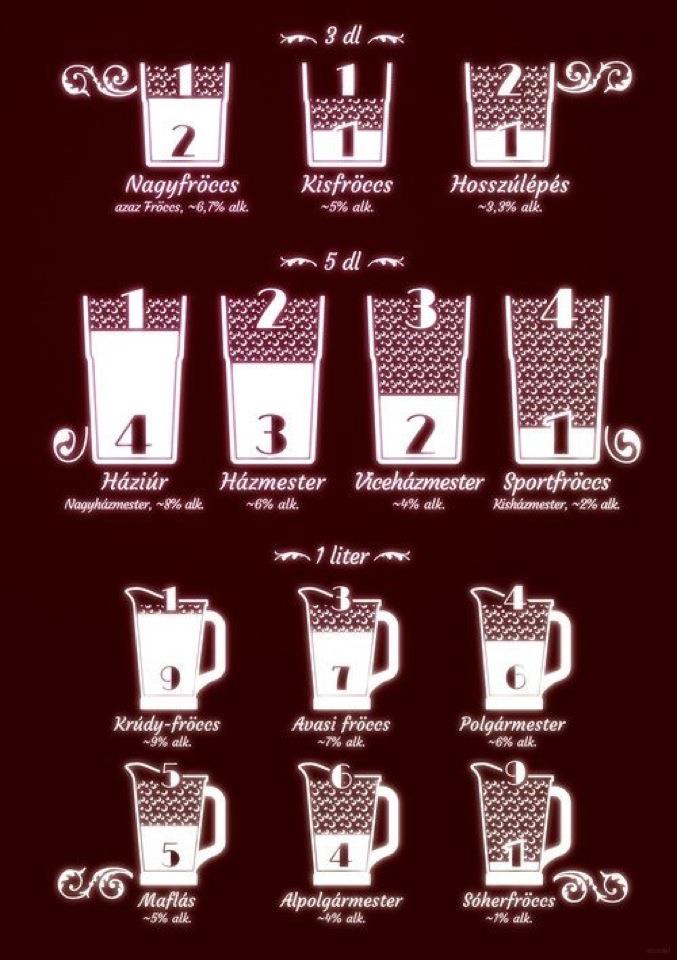 Tomorrow, I’ll add some pics and my favorite places in Budapest! –

Szia! (sounds like ‘see ya’, used with like ‘ciao’ but with whom you are first-name familiar only)