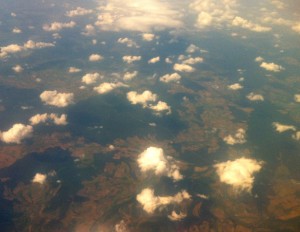 Yesterday we left a hot sunny Paris and arrived to a warm rainy Prague.  A very friendly American-born driver met us at the airport and brought us to our apartment. There we met  the owner who showed us the apartment and a map of the area marking places he recommended for shopping, eating, and where to catch the tram. We went to Café Louvre for a nice Czech dinner. We figured out the exchange rate for the koruna. Prices here are much cheaper than Paris!

Aidan recovered and had more energy so we were able to venture further and longer our last few days in Paris. We went to the flea market (‘les puces’ or ‘the fleas’) where walked through a large area of stalls playing loud music and selling food, African goods, sneakers, t-shirts and other clothing all targeted to those who aspire to look like a ‘gangsta’. We kept walking and eventually found the more Parisienne, charming, vintage, antique markets that we envisioned. For clear directions, here’s a link to an adorable blog, Oh Happy Day.  It would have been reassuring had I read this before we went.  We were there on a Monday when many stalls were closed but since we were there to just browse, it was nicer for it to be less crowded.

After lunch, we went to Centre Pompidou and breezed through the exhibits of modern art from 1905-1960. The 1960’s – current day exhibition really captured the boys attention. They spent quite some time taking photos and videos.  Willem was enthralled with a video installation titled The Dome.  He made Aidan and I come watch it but Aidan didn’t share the same appreciation. It was after six when we were ready to leave. I really wanted to see the Brancusi Atelier but it was already closed. 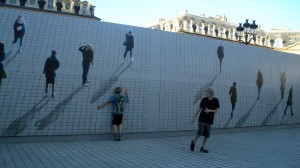 We were tired and cranky but pressed on to the Tuileries where we had a nice dinner nearby. Three Frenchmen who sat next to us complimented Kevin on how well behaved and integrated in our conversation the boys were.  So good to hear as we’ve had our share of exasperated moments where we have showed each other (and others) our ugly sides.

The boys and I went to an amusement park in the Tuileries and rode the ferris wheel just after the sun set. The Eiffel Tower was lit up and had the same golden glow as the crescent-shaped moon that hung just above it.  It was an amazing view.

The boys then had a blast floating, running on water in plastic bubbles! 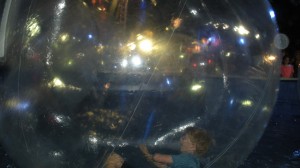 Tuesday we attempted to go to Les Catacombs. It was a hot day and a cool underground stroll among piles of bones seemed refreshing but instead we wandered around misled by a sign pointing to the wrong direction. We were asked by others for directions so we weren’t alone in our confusion. Of course, by the time we found the entrance, it was closed.

Spent a quiet afternoon reading in the shade at Jardin du Luxembourg. Willem enjoyed the playground where he made friends and played tag.

After a very hot and crowded ride on the metro, we had dinner along Canal Saint-Martin. Enjoyed watching people ride by on bikes and groups of friends sitting along the quai having a picnic.